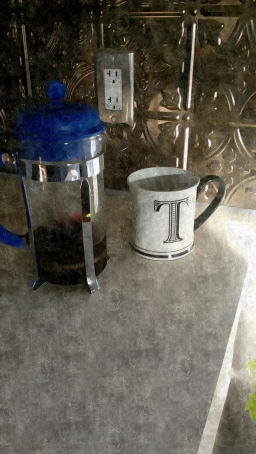 “How long do you steep it for?”

“Maybe I should Google it.”

A conversation between my boyfriend and his mother. About the French Press. That she bought almost a year ago at least. I stood there in the kitchen eating strawberries, laughing to myself because I also had no idea how long steep the coffee for. In fact, I normally don’t touch the French Press because it seems complicated. Though after searching the shallow end of Google, I stumbled upon a few websites to help me out while I determine how to use it (I will add links down below!) and it is pretty simple. Turns out my boyfriend was using it properly. Sort of. The time to steep should be about 4 minutes, not 5 but we were close!

Before I get ahead of myself and lose ya’ll, let me explain what a French press is. A French press, also called a Cafetiere is just another way to brew coffee but it’s a little different. While a French press has been around since the 1850s, a lot of households still use these fancy contraptions rather than a plug in to the wall coffee maker (1).  I’ve heard a lot of people talk about the benefits of using a French Press including that the coffee tastes better and stronger. I only see a small difference to be honest, but I do think it’s a fun kitchen gadget to use once in a while.

Most coffee enthusiasts will tell you to use fresh beans and grind them yourself—Burr grinders seem to be the most preferred by various websites (2,3,4,5). This is because the flavors of the coffee taste better as such, which I have found to be true the few times that I’ve bought whole beans to grind. However, the cheapest and to be honest the most convenient for me, is to skip that step and get pre-ground coffee–currently I’ve been using Private Selection Kona from Kroger—and it tastes just fine! But to be honest, I don’t like using the French Press because it’s too strong for me and it feels like a lot work (I might just be really lazy in the morning). But on the weekends or the days that work closing shifts, I may be able to convince my boyfriend to make me some coffee and those are the times that he prefers reaching for the French Press rather than the coffee maker. How does it work? This is how he found is the best way to use it:

****My French Press says to use a wooden spoon, not a metal one. I would recommend listening to any caution, warning, or directions label!

Step #4-Let steep for about 4 minutes and then slowly push the plunger in to push the coffee grounds under the filter.

Step #5- Pour and enjoy the coffee however you like it!

Also, check out some of the links below for some additional informational and more in-depth directions! While I don’t see the difference, there are a lot of people who do. An additional perk is when you have company over—the French Press is a simple way to have coffee on the counter ready to go.